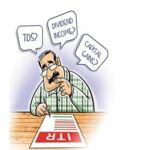 The common man have various myth’s regarding income tax return and in this article we are going to discuss some of that myths:

1. A person is not required to file his income tax return if TDS has been properly detected and there is no tax payable

Now many people think that if the TDS has been deducted on their income they are not required to file the income tax return especially the salaried employee so as far as other peoples are concerned the TDS rate is very less as compared to any of the Income Tax slab rate but after deducting some of the expense it might come down to the TDS rate but then also one needs to prove that he has incurred those expenses and for that he needs to file the income tax return.

As far as salaried employee is concerned he also needs to file income tax return compulsorily because no. 1 as per Income Tax provisions i.e. section 139 any individual who is having total income above 2.5 lakh rupees need to file his income tax return and secondly there may be a situation where a person is employed with two or more employers and they don’t know that a person is doing job at two places and they might deduct TDS based on their individual salary but in actual he is being employed by two persons and his income is way more than what the individual is thinking so in that case it becomes very important that the assessee files his return of income.

2. A person is required to file different income tax return for different sources of income.

But that’s not the case if we see the income tax return structure the ITR 4 includes business, salary, other sources income and house property income.

Thus, a person who is having salary income income from business which is under presumptive taxation and interest income or even rent from house property he can use single itr4 and show all is income. Hence, ITR is based on a person and not based on this sources of income.

3. If a person is filing ITR 3 he cannot take use of presumptive taxation.

People have the belief that if they are using ITR 3 for whatsoever reason because they are earning for example business income as well as capital gain income so in that case they might have to shift from ITR 4 to ITR 3 and in that case they might not be able to use the presumptive taxation benefit and they will have to fill the whole balance sheet and profit and loss account.

However that’s not the case if you look at the ITR 3 it has various columns or say clause where you can easily show your presumptive taxation income separately and you are not required to file your entire P&L and balance sheet.

Thus, if a person who is shifting just from ITR 4 to ITR 3 because his total income exceeds 50 lacs or he is earning capital gain income than in that case he is not required to fill the full balance sheet and p&l and he can still show his income under section 44ad or 44ada.

Thus, this are various myths that we found in people when they came to us for consultation. What is your myth about Income tax return comment down below.