Recently CBIC had made a tweet which created a lot of panic and curiosity among many people which read as under:

“Now, Businesses with an annual turnover of up to Rs 40 lakh are GST exempt. Initially, this limit was Rs 20 lakh. Additionally, those with a turnover up to Rs 1.5 crore can opt for the Composition Scheme and pay only 1% tax.” 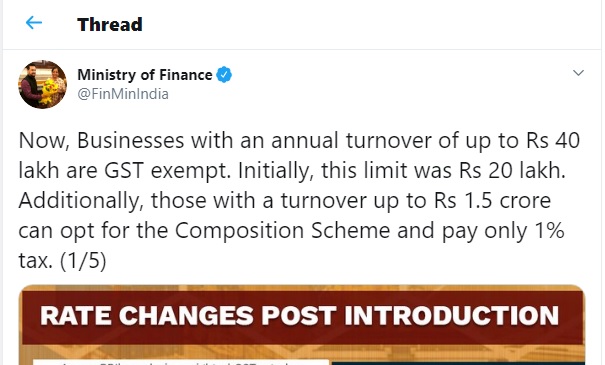 Businesses include both goods as well as service and hence people thought turnover limit for services has been increased.

People started to tweet about the same and spread this news and then CBIC had to come up with another tweet within few hours which clarified the above scenario which read as under:

Thus, it is because of government publicizing their one year old decision which created confusion among the people and now it is clarified that GST registration limit for goods is Rs. 40 lakh and for services the limit is still Rs. 20 lakh except some special states.

Special states are as below where the above two limit are half:

Extension of time limit for submission of financials with SEBI till 15.09.2020